31 Mar The Many Uses of Shipping Containers Today

Posted at 05:16h in Uncategorised by acwpadmin 0 Comments
0 Likes

Trade between neighbouring communities has been a feature of humanity for millennia, although merchants mainly travelled overland. The first recorded instance of maritime trade dates from around 5 000 years ago when merchants from the countries now known as India and Pakistan took to sailing the Arabian sea to avoid robbers. Long before the appearance of shipping containers, maritime trade was growing in importance. The demand led to the establishment of ports dedicated to importing and exporting desirable trade goods, particularly silk, tea, and exotic spices. 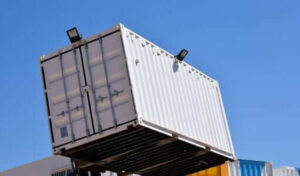 In time, the nature of trade goods began to change. Those in less developed countries developed a taste for manufactured goods that were unavailable locally from the industrialised nations. However, one major obstacle remained to hinder the growth of maritime trade. It was expensive, and even the faster steamships did little to reduce the cost.

Though these were not shipping containers as we would recognise them today, in 1956, an American trucker named Malcolm McLean hit on the idea of loading almost 60 fully-laden trailer vans directly aboard a specially converted tanker. He had been pondering the problem of how to reduce loading and unloading times since the ‘30s, and his solution was destined to transform maritime trade and provide an unprecedented boost to the global economy.

The accelerated loading and unloading significantly reduced costs, while the introduction of dockside cranes to handle the shipping containers cut them even further. That said, one of the most significant boosts came with the agreement to standardise the dimensions of these metal storage units. This decision would further assist the handling process and maximise the use of the available onboard space. Known in international shipping circles as TEUs or Twenty-foot Equivalent Units, these are approximately six metres in length and are one of two standardised types in everyday use. The larger of the two is exactly twice this length.

By 1973, around four million shipping containers were being transported annually. Today that figure has reached already exceeded 225 million and continues to grow. To cope with the demands, container ships have also been growing, not only in number but also in size. In the latter category, China holds the current record with its 400 metre-long OOCL Hong Kong. Launched in 2017, the vessel can accommodate more than 21 400 TEUs.

Today, shipping containers adorn docksides and inland storage centres worldwide, but not all will return to the sea. Some will become fixed storage facilities for temporary or permanent use, while others will be converted to park homes, site offices and other forms of accommodation. To learn more, contact Absolute Containers.