Posted at 06:40h in Uncategorised by acwpadmin 0 Comments
0 Likes

Constructing a Fully Functional Office From a Disused Container

Among the hottest topics since the latter part of the 20th century has been the problems caused by waste. The practice of just consigning it to landfills is proving to be unsustainable as acceptable new locations have become increasingly difficult to find. Instead, the emphasis has shifted to recycling in a bid to conserve dwindling natural resources. What works for used cardboard, plastic bottles, and glass can be applied to larger items. Today, office containers serve as a classic example of the many possible benefits when repurposing items no longer required for their original task. 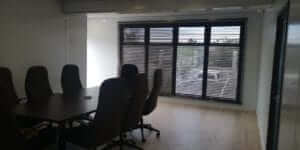 It was a trucker named Malcolm McLean who, in 1937, first took note of the slow process of loading and unloading marine cargo. He not only saw the problem but recognised it as a business opportunity and, in 1956, McLean launched the world’s first tanker designed to carry cargo in large, purpose-built metal boxes. Today these vessels provide another possibility. Converting containers to create office space and similar facilities has since become a profitable occupation and one for which there is a growing demand.

In addition to the vast number of these large, rectangular units stowed on tankers, there is a similar volume sitting on docksides or in yards, either storing items or awaiting cargo. At some stage, owners often find they have no further need for them. The fate of these decommissioned units varies. Some will be sold for scrap and their metal recycled. Others will be auctioned off at a bargain price and often converted to office containers.

Not only do these conversions provide a very economical option for any business that may need some extra space in a hurry, but the end-product is readily transportable and so ideal in locations where permanent structures are either not permitted or impractical. In the right hands, the potential of these conversions is almost unlimited. In their simplest form, office containers may serve only to provide some additional nearby storage space for stationery or documents and files. However, they can be insulated to keep out the cold, air-conditioned to cope with the summer heat, fitted with windows to provide natural lighting and wired to power PCs, copiers, and similar devices.

Individual units are 2,4 metres wide and either 6 or 12 metres in length but can be combined to form whatever layout and total floor space the purchaser may require. Office containers are a means to create space in a hurry while providing an environment in which staff can work comfortably and efficiently. Chat to Absolute Containers about how you could gain extra or permanent or temporary workspace quickly and economically.